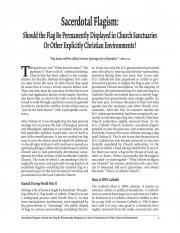 Should the Flag Be Permanently Displayed in Church Sanctuaries or Other Explicitly Christian Environments?

This should not be dismissed as if it were a trite matter. If it were such a minor matter why are so many so incensed and hostile when the issue is raised or when people by their actions refuse to acknowledge the unity of the flag and cross. Remember in 1943 at the height of WW II the government tried to impose a pledge of allegiance to the flag on students and did it with the backing of Church officials of practically all denominations. However, the U.S. Supreme Court ruled that enforcing such a pledge in a classroom was unconstitutional because "Here it is the state that employs the flag as a symbol of adherence to government as presently organized. It requires the individual to communicate by word or deed his acceptance of the political ideas it bespeaks. Objection to this form of communication when coerced is an old one, well known to the framers of the Bill of Rights." [FN 13]

[Footnote 13] "Early Christians were frequently persecuted for their refusal to participate in ceremonies before the statue of the emperor or other symbols of imperial authority."

How strange that judges on a secular court see the power, the moral-theological seriousness and the religious dimensions of the symbol of the flag of a nation-state, but bishops, priests and ministers remain oblivious to it-or if they do see it then they persist in the irrationality of insisting that the symbols of the flag and the cross communicate compatible truths.