Franz Jägerstätter: The Man Who Chose to See 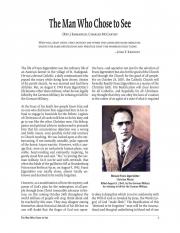 Franz Jäggerstäter, an Austrian martyr, is among the new Blessed announced by the Vatican.

The life of Blessed Franz Jägerstätter was a simple life. An Austrian peasant from the village of St. Radegund, he was a devout Catholic, a daily communicant who prayed the rosary while doing farm chores. Sexton of his parish church, he married and had three children. On August 9, 1943, Franz Jägerstätter was killed by the German Military for refusing to kill for the German Military.