A Symbol of War’s Forgotten Flotsam for Whom There is No National or Religious War Victims’ Day Nor War Victims’ Memorial
Emmanuel Charles McCarthy
Roger LaPorte-November 9, 1965207.87 KB 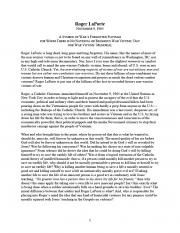 Roger LaPorte is long dead, long gone and long forgotten. His name, like the names of most of the non-warrior victims is not to be found on any wall of remembrance in Washington, DC, nor in any high-end television documentary. Nor, have I ever seen the slightest memento or symbol that would call to mind the non-warrior Catholic victims, home and abroad, of U.S. wars in any U.S. Catholic Church. Yet, the overwhelming majority of victims of war are not military men and women but are rather non-combatant non-warriors. Do not these billions of non-combatant war victims deserve human and Christian recognition and prayers as much the dead violent combat veterans? Roger LaPorte is just one of the billions of the lost-to-recorded-history non-warrior victims of war.

Roger, a Catholic Christian, immolated himself on November 9, 1965 at the United Nations in New York City in order to bring to light and to protest the savagery of the evil that the U.S. economic, political and military elites and their trained and paid professional killers had been pouring down on the Vietnamese people for years with hardly a peep from anyone in the U.S.—including the Bishops of the Catholic Church. His immolation was a last resort, desperate act, of a young man who was trying to love his brothers and sisters in Vietnam and in the U.S. by laying down his life for them, that is, in order to move the consciousnesses and consciences of the economically powerful, their political puppets and the media Novocained citizenry to stop their murderous carnage against the people of Vietnam.

What and who brought him to the point, where he perceived that this is what he wanted to, should do, must do, will forever be unknown in this world. The moral quality of his act before God will also be forever unknown in this world. Did he intend to do God’s will as revealed by Jesus? Was he following his conscience? Was he making his choice in a state of non-culpable ignorance? From whence did he derive the idea that he could be doing God’s will by killing himself to try to save the earthly life of others? Was it from a logical extension of the Catholic moral theory of justified homicide, that is, if a person could morally kill another person to try to save an earthly life, why should it not be morally permissible a person to kill him or herself to try to save an earthly life? Why is killing another human being to save a life a morally neutral or good act and killing oneself to save a life an intrinsically morally grave evil act? If taking another life to save the life of an innocent person is a good act in conformity with Jesus’ teaching, “No greater love has a person than to lay down his life for his friends,” then why doesn’t the same apply for taking one’s own life to save innocent people? Isn’t this exactly what is being done when a soldier intentionally falls on a hand grenade to save his buddies’ lives? The moral difference between that soldier and Roger LaPorte is what? And, who is responsible for placing into Roger’s mind the idea that any kind of homicidal violence for any purpose could be morally squared with Jesus’ teaching in the Gospels on violence?

Finally, what brought Roger to the point, where he perceived that this is what he wanted to do, should do, must do? That self-immolation by Buddhist monks in Vietnam was spiritually glamourized and celebritized in significant parts of the anti-war peace movement, including the Christian peace movement, at this time is more than likely a piece of the puzzle of what moved Roger to immolate himself. For example, on June 11, 1963, a Vietnamese Buddhist monk, Thich Quang Duc, immolated himself at a Saigon intersection as a way of protesting the intolerable persecution of Buddhists in South Vietnam by its Catholic President and U.S. surrogate, Ngo Dinh Diem. With specific reference to that Buddhist’s witness, an 82 year old Jewish pacifist in Detroit on March 16, 1965, Alice Herz, and a 31 year old Quaker in Washington, DC, on November 2, 1965, Norman Morrison, followed the Buddhist monk in his choice of self-immolation as a way to try help the people of Vietnam who for years were daily being torn to pieces by high tech and low tech U.S. Military killing gadgets and personnel. Morrison even took his one year old daughter, Emily, with him to a place outside the Pentagon about forty feet from the window of Secretary of “Defense” Robert McNamara’s Office, handed his daughter to someone, then doused himself with kerosene, burning himself to death. His wife said that the reason he brought his daughter with him was “[S]he was a powerful symbol of the children we were killing with our bombs and napalm—who didn't have parents to hold them in their arms.”

Seven days later on November 9, 1965, Roger LaPorte burned himself to death in front of the Dag Hammarskjold Library at the United Nations. He lived for a short while after and in a state of complete lucidity made what the Catholic priest who administered the Sacrament of Reconciliation to him said was “a perfect confession.” In the only public communication he left explaining his action he said, “I did this as a religious act.”

In 1965 the overwhelming majority of Roger’s fellow Catholics, laity, clergy and hierarchy were in support of the war in Vietnam or just indifferent to the slaughter of Vietnamese men, women and children that was taking place under the auspices of the U.S. military. The most prominent and powerful Cardinal in the U.S. at the time was literally aping Stephen Decatur’s words of nationalistic jingoism, “My country right or wrong,” as justification for Catholics slaughtering by the car loads Vietnamese people, 7000 miles away. A Cardinal-to-be was writing a book, using all the paraphernalia of Catholic moral theology to endorse this overwhelming atrocity, which book the Commandant of the Marine Corps would send to all his chaplains and officers to read. There can be little doubt that this serious, informed and empathic twenty-two-year-old Catholic young man in 1965 was affected by support for the Vietnam War shown by the leadership of his Church.

The post-mortem histories of the four who immolated themselves to help the people of Vietnam are quite different. Thich Quang Duc is revered by Vietnamese Buddhists as a bodhisattva, the intersection where he set himself afire has a monument and park dedicated to him and his intact heart is preserved as a relic of the spirit of compassion in a glass chalice. Alice Herz, who was also a refuge from Nazi Germany, has a plaza named after her in Berlin. Shingo Shibata, the Japanese philosopher, established the Alice Herz Peace Fund in her memory. Norman Morrison has a road named after him in the Vietnamese city of Da Nang. In Hanoi a street is named after him and the Government of Vietnam has issued a postage stamp in his honor. An HBO film about him has been made and poems and books have been written about him. The charred dry bones of Roger LaPorte—long dead, long gone and long forgotten—lay in the ground of Section 1, Row 11 of Saint Alphonsus Cemetery in Tupper Lake, NY, “unwept, unhonored and unsung.” Indeed, he was almost instantaneously abandoned by his Church and by those who played a significant role in raising his perception and conscience in relations to the horror and raw evil of the Vietnam War. The above-mentioned Cardinal excoriated the priest who heard Roger’s confession as he lay dying and who had the audacity to say a good word about him publicly. As for those who knew Roger and who after his death went the way of Peter (Mt 26:71-74) protesting vigorously, “I do not know the man,” all that can be said of them is that they made the abandonment complete.

And so, it should be for Roger LaPorte, for such is the case for just about all of the non-combatant, non-warrior victims of war. Those who obediently go off to kill people in other lands, the warriors—whether now dead or alive—are lavishly fawned over as “heroes,” but the billions of noncombatant non-warriors they destroyed in body, mind, soul and spirit must be kept out of sight, out of mind and out of memory, lest they reveal from the grave the immensity of the evil our hero-warriors and their most honorable puppet masters have done to fellow human beings who did nothing harmful to them and who intended to do nothing harmful to them.

Roger LaPorte—“May his memory be eternal.”