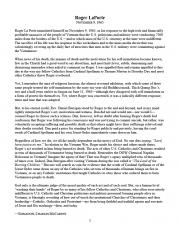 Roger La Porte immolated himself on November 9, 1965, as his response to the high tech and financially profitable massacre of the people of Vietnam that the U.S. politicians and military were conducting 7200 miles from the borders of the U.S.—and to which most of the U.S. citizenry at the time were indifferent. The sacrifice of his life was his response to this wickedness and to the mass media deceit that was calculatingly covering up the daily fare of atrocities that men in the U.S. military were committing against the Vietnamese.

When news of his death, the manner of death and the motivation for his self-immolation became known, few in the Church had a good word to say about him, and most had clever, subtle, demeaning and dismissing innuendos when asked to comment on Roger. I was appalled then and remain appalled to this day at the way my fellow Catholics from Cardinal Spellman to Thomas Merton to Dorothy Day and most other Catholics threw Roger overboard.

Yet, I remember the aura of religious heroism, the almost reverend adulation, with which some of these same people treated the self-immolation by the sixty-six-year-old Buddhist monk, Thich Quang Duc’s, two and a half years earlier in Saigon on June 11, 1963—although they disagreed with self-immolation as a form of protest for themselves. Yet, where Roger was concerned, it was a radically different response, tenor and tone that was adopted.

But, to his eternal credit, Rev. Daniel Berrigan stood by Roger to the end and beyond, and in my mind rightly interpreted Roger’s act, motivation and witness. Dan did not and would not—nor would I— counsel Roger to choose such a witness. Dan, however, left no doubt after hearing Roger's death bed confession that Roger was following his conscience and was not trying to commit suicide, but rather, was voluntarily accepting suffering and possibly death so that others might have their sufferings relieved and their deaths avoided. Dan paid a price for standing by Roger publicly and privately, having the cruel wrath of Cardinal Spellman and his own Jesuit Order immediately come down on him.

Regardless of how we die, we all die totally dependent on the mercy of God. No one dies saying, “Lord, have justice on me.” In relation to the Vietnam War, Roger made his choice and others made theirs. Roger’s act resulted in him being burned to death. The acts of other U.S. Catholics and Christians resulted in tens of thousands of Vietnamese being burned to death. Remember the DOW Chemical Napalm Holocaust in Vietnam? Imagine the agony of that! That was Roger’s agony multiplied tens of thousands of times over. Indeed, Dan Berrigan after visiting Vietnam during the war called it “The Land of the Burning Children.” But one will search in vain for evidence that the wrath of Cardinal Spellman or of the Jesuit Order came down on any of the Catholics who set tens of thousands of human beings on fire in Vietnam, or on any Catholic institutions that taught Catholics to obey those who ordered them to burn Vietnamese people to death.

God only is the ultimate judge of the moral quality of each act and of each soul. But, on a human level “washing their hands” of Roger by so many of his fellow Catholics and Christians, who often were utterly indifferent to U.S. Catholic and Christian politicians and military personnel burning people alive in Vietnam, is blazingly revealing of how out-of-touch the institutional Churches of Christianity and their leadership—Catholic, Orthodox and Protestant—are from being faithful and truthful agents and servants of Jesus and His teachings—then, and today.